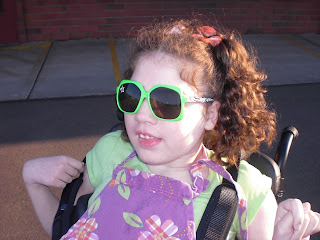 I have a goal this year, please help hold me to it! I want to post on here at least once a week! Right now there is a lot of little things going on with Seaira. She is going to have Esophageal pH study done to determine how much reflux she is having. We are thinking that her Nissin, that was done when she was 3, may need redone. For those of you who may not understand what that is feel free to ask and I will go into to more detail about what exactly a Nissin is. Her back seems be doing well and she is pretty straight with the rods in her back. She has a check up at Shriners at the beginning of February, if there is anything new to update I will do so then. She still is unable to sit up on her own.
She broke her Femur at the end of the last school year, in which I will never forgive myself for. She was in bed sleeping and the doors hadn't been closed, in my defense; I wasn't the one that had put her in it. But I was the one in the room with her. The mail had come and I walked outside to get it and on my way back in I heard her scream. :o( she landed with both legs underneath her. The left femur was broke and there was some muscle damage to the right! She is doing so much better now. The leg will never be perfectly straight but since she doesn't walk and has to be in a wheelchair for transporting and other activities, the leg had to be left with a slight bend in it as it healed.
She is still battling seizures, and I don't know that she will ever have complete relief from them.
We were very lucky to have Lisa's hours increased for the month of January. It was due to some law suit against the state of Washington. But February it goes back to normal, well she does get a 3 hour a month increase. We'll take what we can get! :o)
She hasn't been going to school due to her seizures and medicine changes!
I hope everyone is doing well!
Posted by SeairaLaNae at 2:14 PM